a day on the Bay 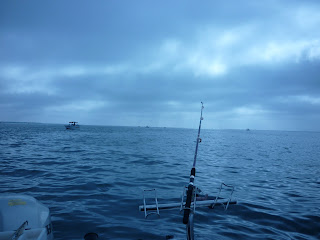 Well not really the bay, Westernport to be exact. It the first time we took the boat out this season and it was great to be back on the water. I dont know if you can see it, if you click on the photo it will get bigger. There were heaps of boats out today. At one stage it looked like a fleet was invading there were so many. 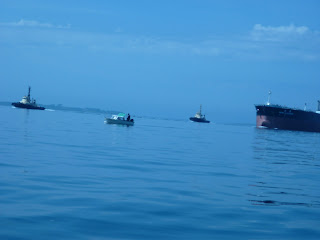 I had a feeling that we were going to be visited by the water police so I checked to make sure that I had my fishing license on me. Well bugger me if not 40 minutes later the police pulled up beside us and told us we had to move as a huge tanker was on its way. Hubby now wants me to predict the Lotto numbers. lol 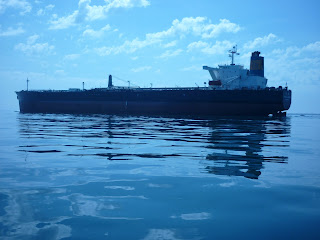 This is the tanker, it had two pilot boats with it and lucky the water police to clear its path as like I said there were hundreds of boats in the water.
Hubby and I both caught a Flathead each and a dont-know-what-sort-of-fish-this-is-but-it-makes-great-bait-fish each. So the tally for this year is dead even.
Lets hope I win as I have a reputation to uphold.
hope you all had a great sunday
see ya
Posted by angela at 4:39 PM

did he ask for your license as well?

Hahh No he didnt Gill, there were too many boats for him to do that. The huge ship was comming. But I did have it so it would fo been all good

The water was very busy, I see! Yes, get a lotto ticket!

Thumbs up on the flathead!