This is my almond tree, and already it looks like it's ready to bust into bloom. 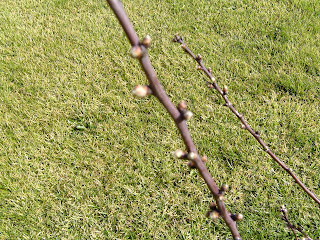 These are shots of the bulbs I have planted around the fruit trees. 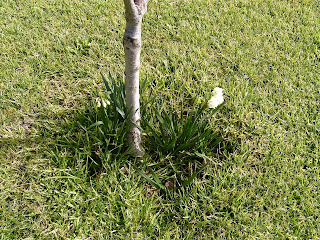 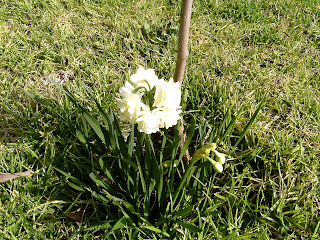 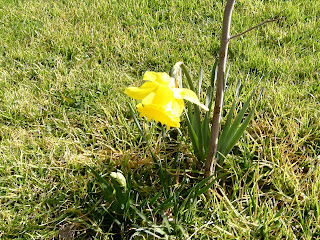 Looks like winter is coming to a close!
see ya

Yesterday I had quilting class and my sticheries are going great. I am now working on summer with autumn the only one left to go. Then I will turn them into cusion covers. I will post photos soon I promise. In the afternoon we have started a club to make small quilts for the babies in special care for the childrens hospital in melbourne. We have obtained some material form reps selling in the shop and have already made three little quilts. I made a whole one yesterday myself. I imagined the little ones sleeping under it and stitched every stitch with love and intent.
I will try and get some pics of those as well.
Have a great day.
see ya
Posted by angela at 8:24 AM 1 comment:

The dreaded flu has still got me, and even a weeks worth of anti biotics haven't helped. Now the other members of this family have started to come down with the symptoms and life will soon get very interesting here.
At least I feel better and I will be able to look after them.
On the job front, I have spent my first morning at the workshop and finished all the outstanding dockets and a customer came in only 10 minutes after I finished theirs to pay.
He had been in twice before but his bill had not been made up, so I have already well and truly made up the money I make at crystal world already.
So this morning I don't have any to do so I have spent the morning reading. Something I have not be able to do for so long.
I have told my boss at crystal world about quitting when Martine leaves to go to Perth, and he said that I can always come back when I want to. He will keep me in mind when large shipments come in so I will still help with the unpacking of those.
So life really is good at the moment.
see ya
Posted by angela at 9:20 AM 2 comments:

Its decision time. Martine the other girl that works at crystal world has decided to go and live in Perth, to be closer to her brother and sister. So she had told our boss she is quiting. This now leaves me with a decision, will I take on full time work. I don't really want to work full time and I do not really have the time. Because I have made the decision to live simply I need to spend lots of time in the garden tending the vegetables and the livestock. As food prices continue to skyrocket this would be more sensible.
I enjoy working the one day a week but as I am the only one trained at the moment I can see my boss telling any newcomers to ring me if they have troubles on my day off. Just like he tells me on Martines day off.
Add to that as we are one mechanic short at work I am now needed to be here at my own business to run the office and be parts delivery girl again.
So the decision has been made that I will stop working at crystal world and start working at our own business.
I love working with the crystals but I think this will be best in the long run.
I hope I am right.
see ya
Posted by angela at 8:41 AM 5 comments:

Today it is cold and wet. So after quilting class I decided to follow the advice of Grammy and made onion soup for dinner tonight. I also made creamed rice. My husband loves this but I don't think the kids have had it before so, if they don't like it there are 3 bowls of it for hubby to eat.
The anti biotics have started to work on the chest and I am feeling better. I don't like taking to many tablets but I have tried everything else.
see ya
Posted by angela at 3:13 PM 1 comment:

A Day in Town

Yesterday we got into Melbourne at 11.30am to get tickets to see the new Harry Potter movie. Unfortunately the only tickets left were for the 11.55 pm session. So instead we went to the museum and saw the latest exhibition called " a day in Pompeii" It was very interesting and informative. There were lots of statues of the old gods and goddess and even the famous body casts of animals and people buried in the ash.
There was a small statue of Fortuna the roman goddess of prosperity and baby girl and I really liked her.
We asked her to bless us and boy did she ever!
As we had bought tickets to the late show we decided to go to the casino to try and spend some time, and it would be baby girls first visit to the gaming room.
First she put $5.00 in a pokie machine and turned it into $10.00. Then dear old hubby turned $50.00 into $140.00 playing blackjack.
We then decided that it was too long till the show so we cashed in our cinema tickets and headed home via Fountain Gate shopping center. The next available tickets for Harry were at 8.30pm so we had time to go home, get the animals bedded down and return in plenty of time.
When we left dear old hubby's wallet fell out of his back pocket and the nice lady who sat in front of us found it and rang us at home at midnight to let us know she had it . It had quite a lot of money in it and we were blown away by her honesty.
It has restored our faith in humanity.
As for Harry, well it was fantastic, although I don't know why one scene was in the movie when it was not in the book.
But after two years between drinks it was worth the wait.
If you live in or near Melbourne go and have a look at Pompeii, it is well worth it!
see ya
Posted by angela at 3:03 PM 2 comments:

Baby girl has got her license to drive. And she hasn't been home since. She is coming back soon so we can all go into Melbourne to see the new Harry Potter movie. We want to see it at IMAX so we can see the 3D action.
Still feeling under the weather, but much better than before. Just a cough and chest issues, but other than that all is good.
have a great weekend
see ya
Posted by angela at 9:32 AM 1 comment: 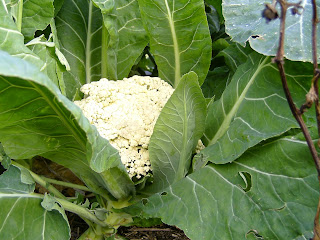 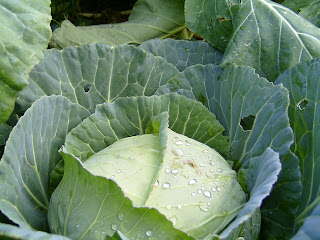 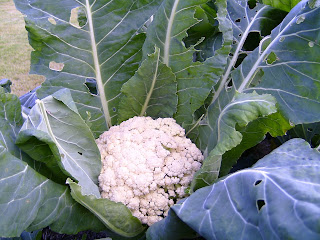 Look yummy dont they.
see ya

Thanks everyone for your kind thoughts and wishes. And for your good advice. I have been taking it easy and I think I have turned the corner.
The flu has moved from my chest to my head now, so hopefully soon it will leave out the top and go away.
Sad day today, I am going to the funeral of my friends mother. She is devastated.
Her mother was sick for a long time but still, its a shock when they finally go.
Hope all is right in your world.
see ya
Posted by angela at 8:54 AM 1 comment:

A little under the weather.

This is an understatement, when it comes to describing me on the weekend. I have not been this sick for a long time.
My whole body ached, it felt like I had gone 10 rounds with Tyson and I had lost badly.
My chest felt like it was on fire and I was going hot, cold around the clock.
It got so bad that I was having dizzy spells and so I spent the whole weekend in bed.
This was not fun as we had dinner plans on Sunday, and our race horse came in second in her second race, which I was not able to see.
I have even send dear old hubby to the chemist to get some drugs for me, which for me is not a usual thing.
I think I have been so busy lately that my body decided to make me rest.
anyway, school starts again today and there is lots of washing to get done, so I will slowly get that done and hubby will pick the princess up and take her to dancing for me.
Still having dizzy spells so I cant drive.
have a great Monday everyone, will post more vegie photos soon.
see ya
Posted by angela at 9:09 AM 6 comments:

This was the moon this very frosty morning. Beautifuful isnt she. 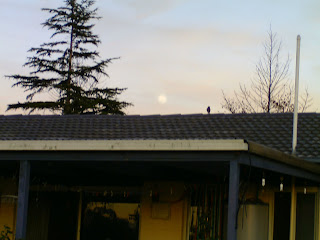 Just a blanket of white everywhere 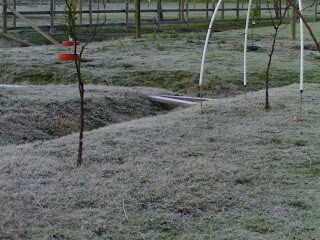 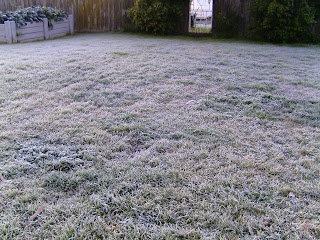 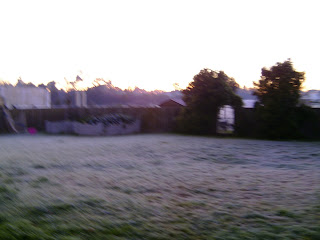 The crunchy noise it made when I walked on it was fun. The clothsline was still covered in ice and hour latter when I hung the washing.
Stay warm everyone
see ya

I havent put pictures on the blog for a while so here are some of what we have been up to in the garden. This first one is the new avacardo trees we planted on the weekend. We have covered them with the shade cloth to protect them form the frosts we get here. 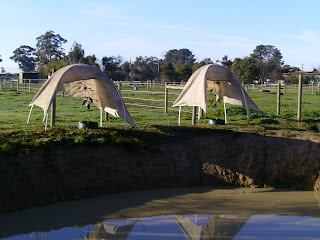 This is the grape vine after my dad pruned it. 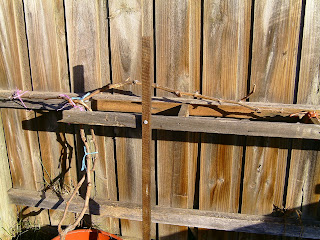 This is the tuscan kale growing in our raised garden beds. Notice the frost, it was very cold this morning. 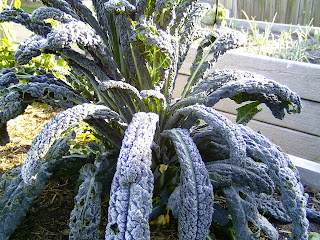 One of my broccoli, ready to be harvested. Yummo! 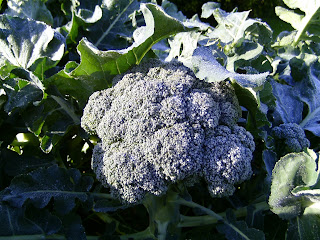 My new mandarine tree, it has two kinds of mandarines grafted on it, so it will crop over a long time. 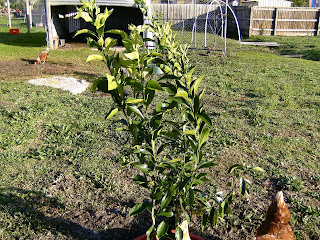 He is fine and healthy again. Was screaming for his breakfast this morning and following me around, and being a general pain.
He started this at 5.30 this morning so the only danger he was in was from me!
Thanks Cathy for your comments, you have no idea how often I type things wrong.
Anywho off to work again. Another busy day.
see ya
Posted by angela at 8:00 AM 1 comment:

This morning got up to a sick cat. He had left little piles of vomit all over the floor. Yuk!
Not what you want to deal with first thing in the morning.
Dear old hubby and I had to go around and clean it all up. It was not a fun activity. It was a bit like an Easter egg hunt, but without the chocolate surprise.
The kids are both home, on holidays today. So l will leave them a note to keep an eye on him.
Must dash, still have to let the chooks and geese out before heading off to work.
see ya
Posted by angela at 7:59 AM 4 comments: