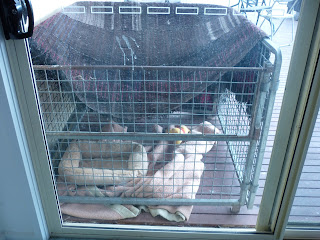 This is were Teddy slept last night, and he was such a good boy. He has spent time in this over the last two days, only during the day the big blanket isnt on. He didnt like it too much at first but when he cried Molly would go over and lick him through the grate. then if that didnt work she would bark once and hed stop. So last night the big heavy blanket was placed over it so that the wind would be shut out and he was put in with his bed, food water and toys. I only heard him bark once and that was around the 2am mark. then Molly did her mama bark and all was quiet again till morning.
A much better arangement me thinks.
He was supposed to be put in the night before but hubby stayed up to watch the Brownlow, a medal night for our AFL footy.
He then was supposed to put Teddy in after that. Well he just couldnt do it, hes such a softy so he slept with him.
But as Teddy has adapted so well it was all worry for nought.
I hope your all sleeping well
see ya
Posted by angela at 9:12 AM

You've got a pretty good set-up there! I admire your resourcefulness!

sharon, you do anything for a good nights sleep!

I think I will sleep well, tonight, out of the tent and in my own bed. Though with two little boys still here, I think it will be an early morning still.