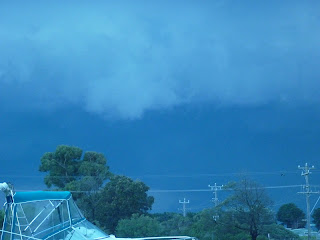 we were told it was coming and we had tied everything down or put it away. Got the dogs settled under the outdoor table and waited. Not till two hours after its ETS that we saw it coming in. Suddenly facebook was alive with photos and because we all lived  in different places we were able to trac it. 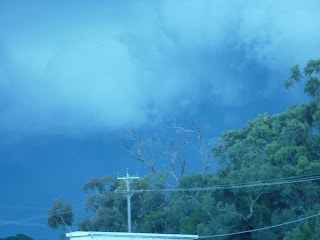 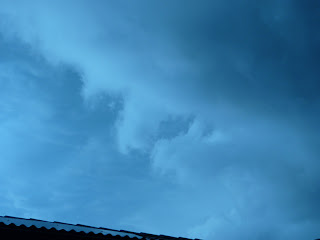 There were posts of its hitting Packy now, and Philip Island is drowing, and OMG here comes the storm, hide the children. 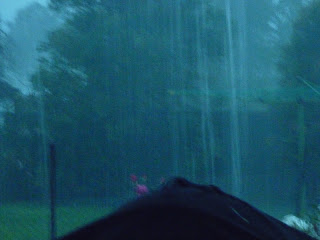 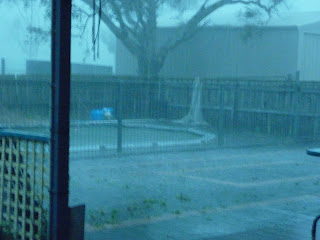 Then it hit with a vengence, it absolutely poured down. You could not hear a thing in the house not even the thunder but you could defenitely feel that!
After about 15-20 minutes it did slow down to a low roar, but if continued to rain until I fell asleep at around 9.30-10ish.
This morning I have woken to the sun shining, the birds singing and the only damamge is lots of plant matter on the veranda, no flooding in the house thank goddness. Still large puddles in the driveway and two tomatoes in pots were over, but Ive fix those,
I dont want to have to do that again in a hurry.
I hope others in its path were as lucky as I was.
see ya
Posted by angela at 8:08 AM

Mother Nature can get pretty wild, glad you are ok!

That was a doozy!! Ive seen reports on the news up here about all the storms down that way.
Lots of sunshine and 32c here..and dare I say it,we need rain !

Wow, I'm so very glad that you didn't sustain any damage. Your photos are terrific.

WOW that looks like a big storm - it's this week coming on 13th we are meant to be in castlemaine for friends wedding. Hope their preparations are ok. Lots of friends are camping in their paddocks.