This week on Tony Ferguson I only lost 100grams
I suspect it has something to do with this heat and my not moving around much. Although I am retaining fluid as my rings are very tight again.
Note to self, DRINK MORE WATER! 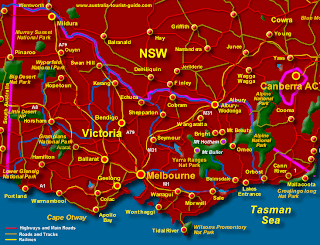 Grammy asked if I fish in the sea, well sort of. If you click on the map above, south of melbourn you will see Wonthaggi. That bay Wonthaggi is at the south east of is called Westernport. That were we fish.
We enter in at Tooradin which you cant see on the map, but is north of Wonthaggi.
its a beautiful bay full of fish. If you remember those snapper we cought a few weeks ago, we cought those in Port Phillip Bay, which is the large bay that Melbourne is at the North tip of.
End of geography lesson'.
see ya
Posted by angela at 9:36 AM

So THAT's where all tha fishes swim! X;-)