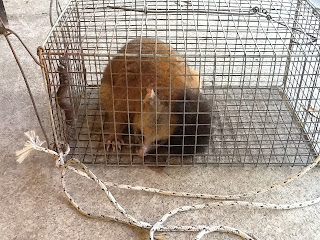 This little critter is a bushy tail possum. Not really sure if its his official name but thats what we call them. he has been living the good life in my roof about my bedroom for well over a year. I have gotton used to him coming and going but hubby never heard him. Until recently!  As soon as it interfered with his sleep he didnt bother to do anything about it. But now he cant sleep in like he wants, so we borrowed the trap from a neighbour and last night fluffy here took the bait. My daughter named a possum who used to live in our roof when she was a little girl fluffy, it helped her not be afraid of he noises it made.
You have to be very vigilent when maintaining a roof here in the bush as one loose tile and they push it to one side and move right in.
so now we will take fluffy for a long drive, and find him a new home in the bush. it has to be more than  kilometers as they are territorial and come back! Hubby will fix the roof and hopefully when a new possum moves into this territory, which one will eventually will, it will not be able to move into our roof.
see ya
Posted by angela at 9:43 AM

yea know the fate of possums here in our home. Can't believe they are protected in aussie.

It's not as pretty a name as you came up with, but I think it's a brushtail opossum: http://en.wikipedia.org/wiki/Common_Brushtail_Possum

Prettier than our possums. We had one that lived under the house for a year or so but it moved on.

I bet my hubs would be the same way - ignore it until it keeps him away. Those men get pretty protective of their beauty sleep =)

Aw, it's cute, sort of... Glad you caught it tho! And I'm glad it didn't have a passel of babies up there in your roof!

Angela - just wanted to thank you for your prayers for my young friend Kristen and her surgery. She is healing well, went home today, and we're still waiting on the path report. She will have speech therapy for awhile, too. But things are good right now. I appreciate your encouragement and prayers! Hope the New Year is going to be a great one for you and your family!

I have seen a couple of "possums" that look similar to this.. I guess they are in NZ as well

Hello Angela
How far down the road did you take him - wouldn't the ranger do it for you?
I haven't seen our family around for while and am wondering of all that very hot weather has bothered them - doubt it though. Once I see the tips of next doors oak tree on the ground or hear them stomping around on the roof I'll know they are back
Take care
Cathy